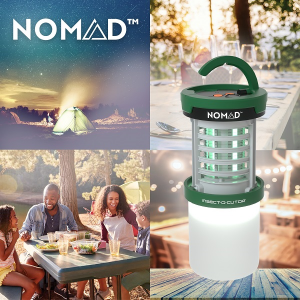 “The Insect-O-Cutor Nomad LED flykiller offers protection against flying and biting insects with a collapsible compact design, making it perfect for traveling. When this product is fully charged it can be used for up to 18 hours (USB charging cable included).

This product can also be used as a bright 200 lumens hanging light that has adjustable brightness, making it perfect for outdoor dining, patios, gardens, and camping.

With dual green and blue UV LED technology this product will attract a wide range of flying insects.” 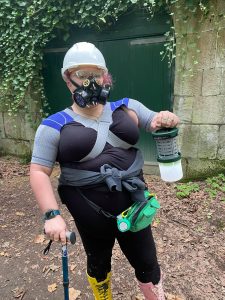 My first impression opening the Nomad Insect-O-Cutor was the size was surprisingly small. But as most women reading this will know- It’s not the size that counts, It’s how well it can be used.”

I was also amused by the lamp enclosure part being soft silicone/rubber and squeezable.

After speaking with the manufacturers about the item I did learn some more information. On lower brightness settings the Insect-O-Cutor will run longer. The bug zapper and the light both are able to function separately so it can be used as either a lamp or bug zapper independently. That said, they can also be used at the same time. However, it will run longer if only one setting is being used. 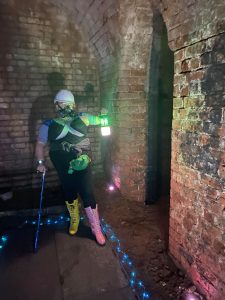 I fully charged my unit and used it for an hour and a half. It still had a charge left. I just turned it off because I had finished using it and was back in a car. However, it did have some power on it when I got it out of the box.

The functionality is pretty cool. I took it with me to a tour of Birmingham Key hill Catacombs ( An enclosed mausoleum where people would have been laid to rest). The expression, “dark as the crypt” made me realise it would be the perfect opportunity to test out the lamp part of the unit. Although upon leaving the catacombs I found that the unit had caught and killed a wasp! Saving me from being stung!

I was also able to clip it onto my waist bag, It being lightweight meant it didn’t pull at my belt. The Nomad Insect-O-Cuter is also quite robust as I did accidentally knock it off my belt at one point but the unit was still working! 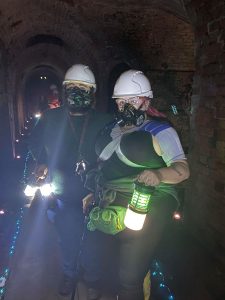 I was a little concerned about fire safety. But after reaching out to the manufacture they said “ The plastic used to construct the Nomad has passed the relevant CE requirements for flame retardancy, that being said, should it be thrown into a bonfire, for example, it will melt.”

I would say the only downsides I see to the unit is you can’t see how much charge you have remaining on it and the silicone bottom makes me nervous to put it on a table while in use. There is a hanger at the top so if it was being hung under a gazebo, in hand, or in a tent that’s not an issue plus the silicone cover also helps with waterproofing.

My video of the product

To show you more of the Insect-O-Cutor Nomad LED Flykiller, I created a video so you can see more of this unit, including a comparison to a larger home-based similar item. This runs for just over 10 minutes below:

All in all, I do quite like the product and it is definitely a useful tool for people who enjoy outdoors and are sensitive to bug bites!

As mentioned I avoided a wasp sting by simply carrying it with me.


This article was originally published by Campingforwomen.com. Read the original article here.

CAMPING | Quick and Easy Recipes for Campers on the Go

9 Things to Better Your Mental Health

9 Things to Better Your Mental Health

4 Ways to Reduce the Environmental Impact of Your Campfire

ACTIVE | Pushing Myself With A Winter Open Water Swim

Taking a Road Trip above the Arctic Circle Norway

ABOUT US
Biennaledimantova is designed to provide up to the minute daily camping news and the best information on gear, food and hiking from around the world.
Contact us: contact@biennaledimantova.com
FOLLOW US
© Copyright 2021 - Biennaledimantova